Have you had a hard time sewing a straight seam? You think you’re sewing straight. You’re trying to sew straight. But when you pull your work off the sewing machine, the seam allowance isn’t even. 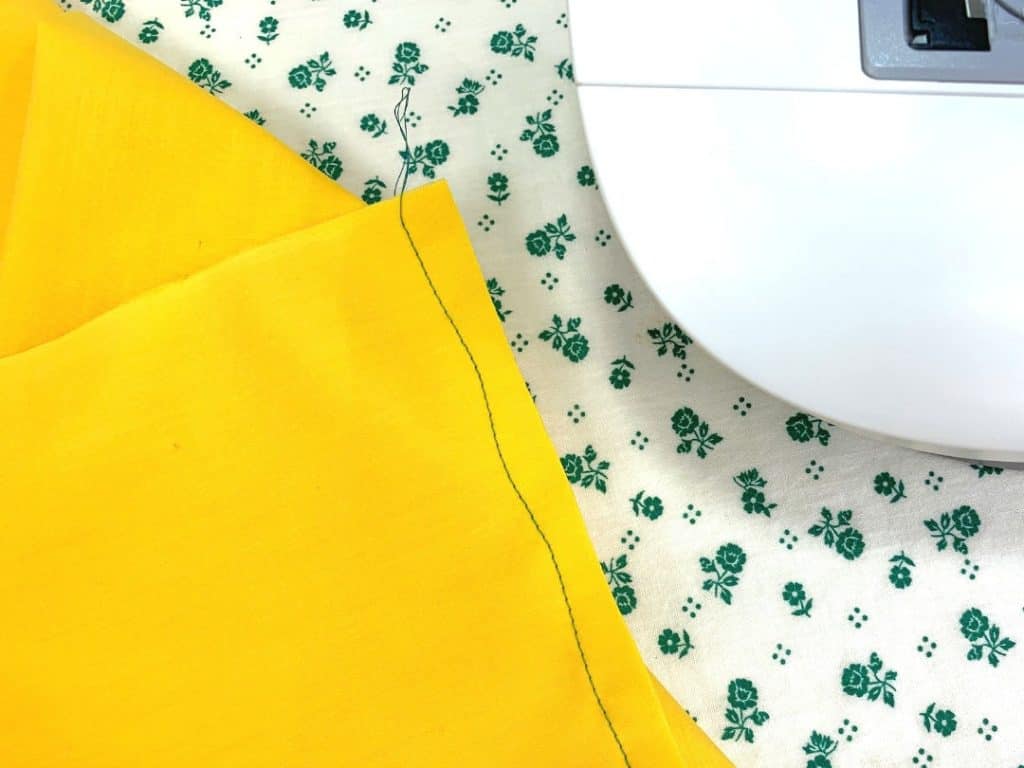 First, let’s make sure we’re talking about the same thing. A seam is the stitched line that joins two or more pieces of fabric. The space between the edge of the fabric and the seam is the seam allowance. 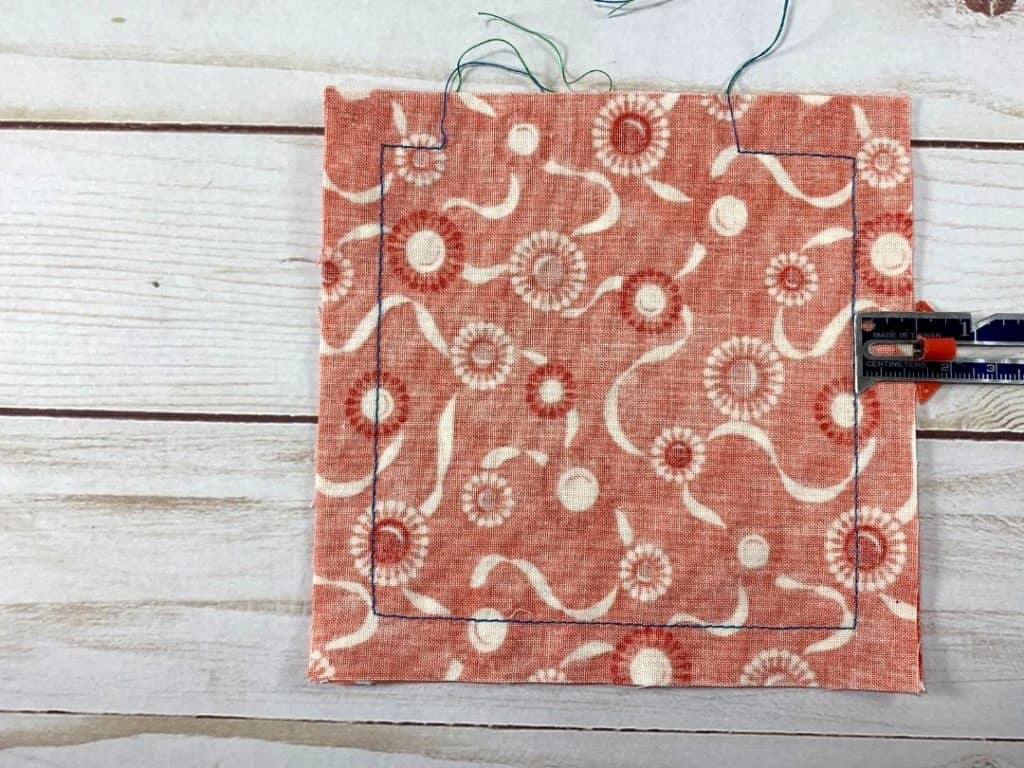 The seam is sewn in blue thread. The seam allowance is 1/2-inch.

There are many different scenarios that could be the culprit of an inaccurate or wonky seam.

It could be hard-to-see measurement lines on the needle plate. Or shadows cast over the sewing area so there isn’t enough light to see what you’re doing. Maybe you’re sewing too fast and you lose some control over the fabric. Never fear, regardless of the cause, there are solutions so you can sew straight seams every time.

Most needle plates have stitching guidelines etched into the metal. These guidelines are a starting point for seam allowances. However, many are not very long and can be difficult to see when you’re actually sewing. This means they’re not the best to use as a guide for sewing a straight seam. 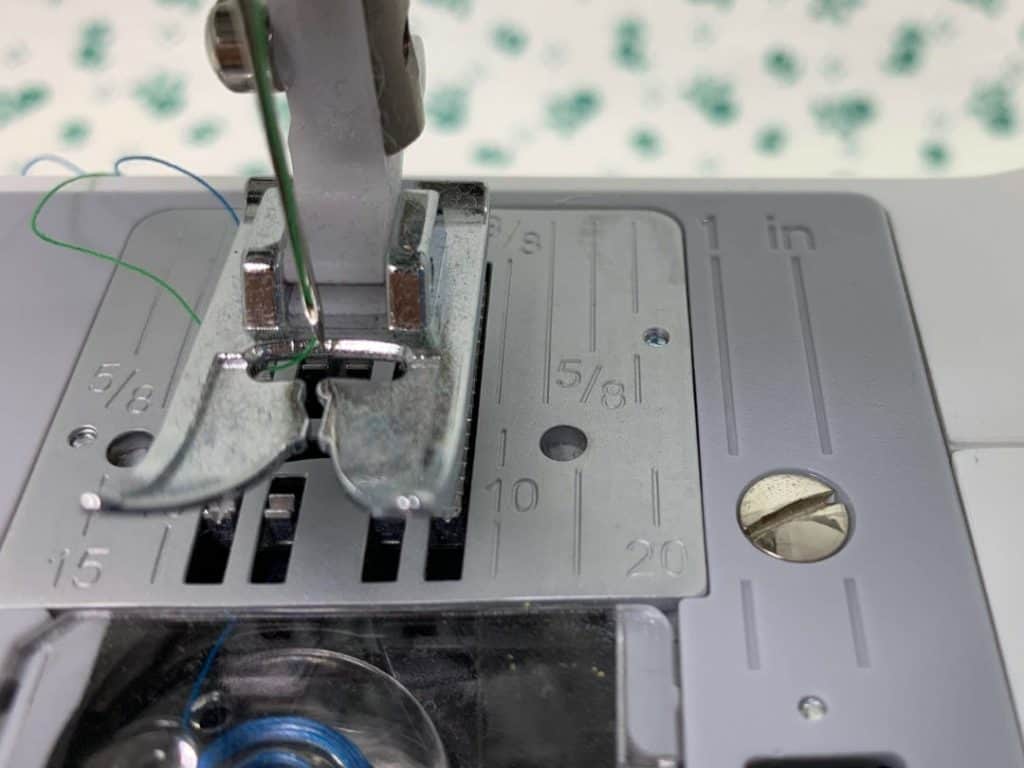 These guidelines aren’t much longer than the presser foot.

Thankfully, there is a way to extend the stitching guidelines so you can sew a straight seam. In addition, there are other tools you can use, too. The methods described below are all ways I use to make sure seams are straight so seam allowances are accurate.

Tools to Sew a Straight Seam

Use a piece of painter’s tape to extend the stitching guideline from the needle plate. Painter’s tape doesn’t leave a residue when it’s peeled off. Also, the bright color of the tape provides a contrast to the sewing machine’s color so the line you need to follow is easy to see. 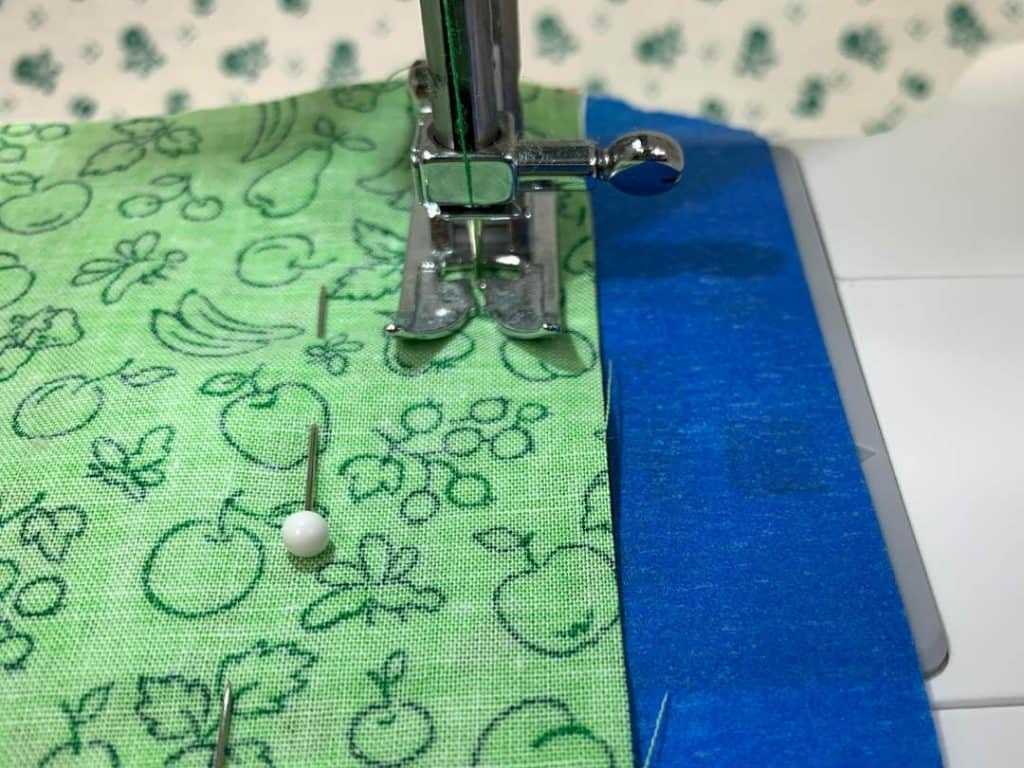 The only disadvantage I’ve had when using this method is the painter’s tape needs to be removed when I need to get into the accessory box.

A Presser Foot With Adjustable Guide

There is a presser foot with an adjustable built-in guide. I first discovered this type of presser foot when I purchased a Singer Fashion Mate. The model I bought, 3342, came with the Sew Easy Foot. Its purpose is to ensure an accurate seam allowance. The Sew Easy Foot is not a standard accessory that is included on all Singer models. 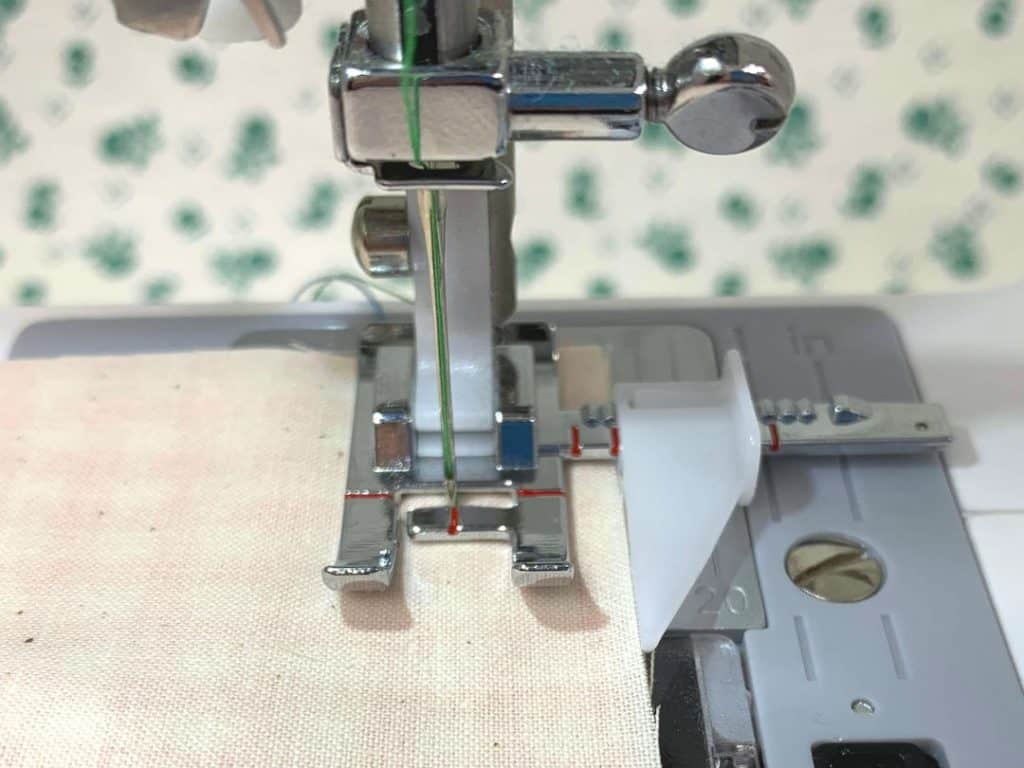 One of the golden rules of machine piecing quilting blocks is a quarter-inch seam allowance. I can’t emphasize enough that the 1/4-inch presser foot is a must-have if you are piecing together quilt blocks on your sewing machine. 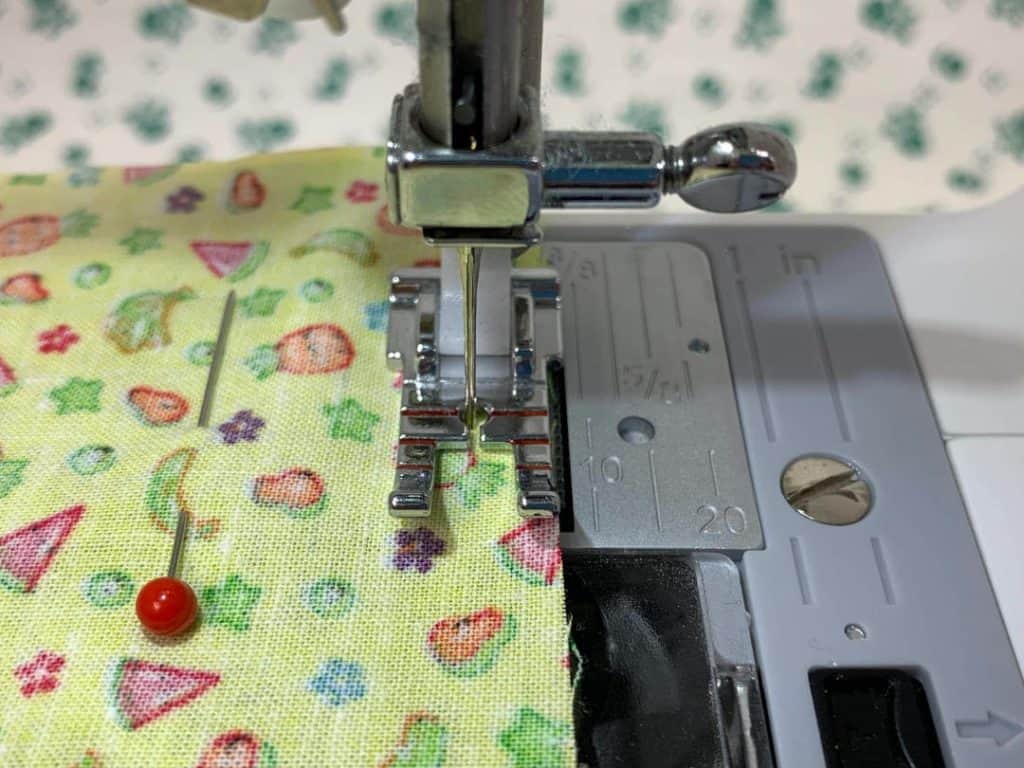 While a presser foot with an adjustable guide is a great tool, it doesn’t go as narrow as a 1/4-inch. If you’re working on anything quilt related, make sure you have 1/4-inch presser foot and use the edge of the presser foot as the guide.

Sometimes a project doesn’t call for a specific seam allowance. This frequently happens to me when I’m creating something without a pattern or written directions.

In this situation, I will often use the edge of the standard presser foot as my guide for sewing a straight line. 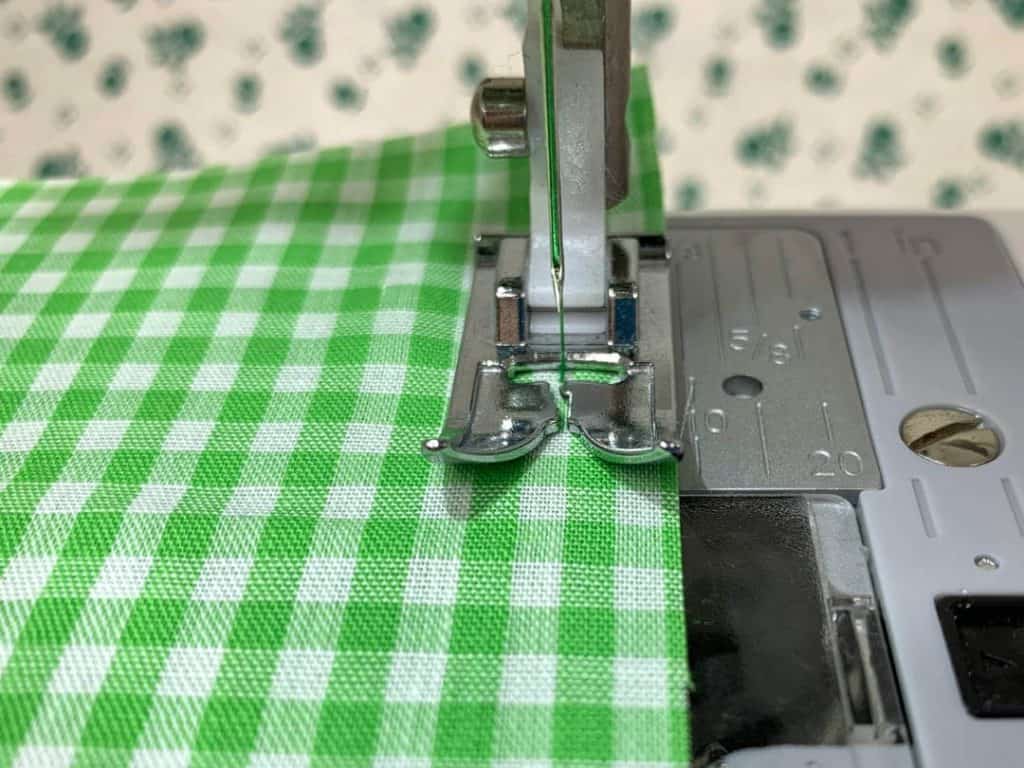 There are a variety of removable seam guides that can be purchased. For Christmas, my husband got me the 6-in-1 Stick ‘n Stitch Guide by Clover. It uses a sticky adhesive to attach to the needle plate and can be used as a guide for straight and curved seams. It’s easy to remove and doesn’t leave a residue on the needle plate. When the adhesive becomes less sticky it can be renewed with water and dishwashing soap. 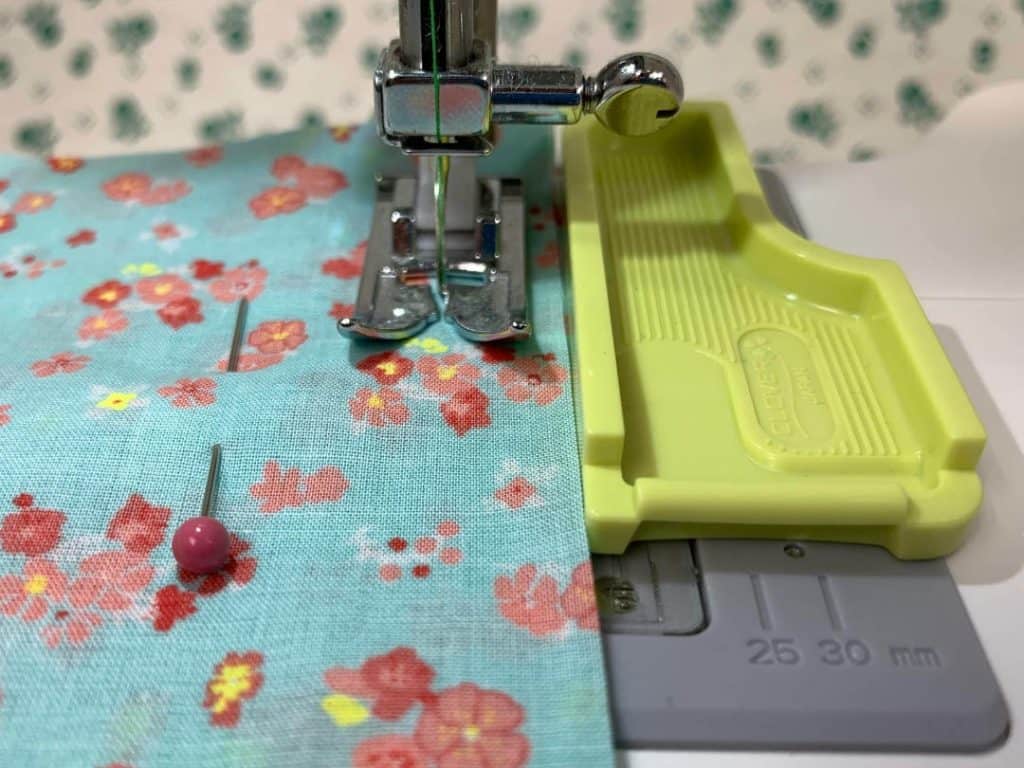 At the time of writing this post, I’ve only used the Clover guide to do straight seams. I like having the raised edge of the guide to keep my fabric straight while sewing.

Strategies to Sew a Straight Seam

Regardless of the tool you use as a guide to sew a straight seam, there are a few strategies you can use, too.

Light Up the Sewing Area

Too many shadows in the needle and presser foot area may make it difficult to see the guide you’re using to sew straight. If you’re unable to light up the area enough to eliminate shadows with a tabletop or stand lamp, consider getting a lamp that attaches to your sewing machine and has an adjustable neck. 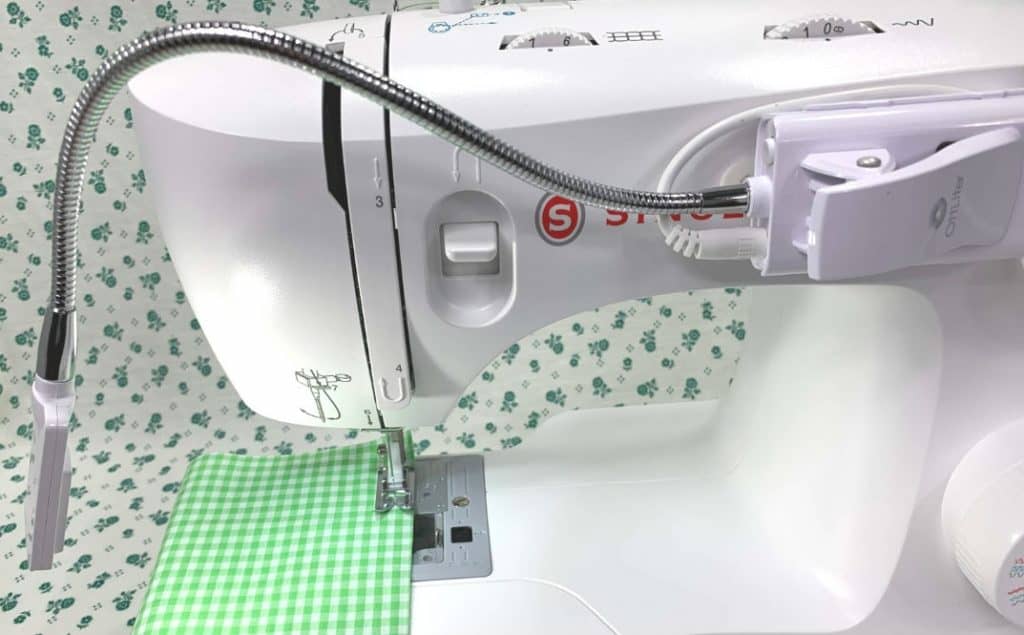 This OttLite is removable. It slides into a bracket that is attached to my machine with an adhesive strip.

The speed you sew can affect how straight a seam is. The faster you sew the greater the chance the seam will not be entirely straight. Sewing isn’t a race. To make sure the seam is as straight as possible, ease up on the foot control to slow down.

The up and down of the needle can be mesmerizing. And, if you’re new to sewing, there may be a little fear you’ll sew over your finger if you take your eyes off the needle. If you keep your hands placed in front and to the side of the needle plate, you won’t pierce your finger.

To sew a straight seam, you need to look at the guide you’re using, not the needle.

Keep your eyes on the edge of the fabric so you know it’s moving along the guide as it goes through the sewing machine.

How to Sew a Straight Seam

These 8 tools and strategies have helped me sew straight seams resulting in accurate seam allowances.

There isn’t one tool or strategy I use more than another. It really depends on the type of project I’m doing and what best meets my needs at that time.

The goal is always to sew as straight as you can so seam allowances are accurate and seams and topstitching are done well to enhance the overall appearance of the finished project.