When sewing pieces of fabric together, it’s often beneficial if you pin them before you sew. Pinning ensures the pieces stay together as you feed them through the sewing machine. Any shifting or movement of pinned pieces is kept to a minimum.

There are different ways you can insert pins in fabric to keep it secure while you sew.

Pin Perpendicular to the Edge of the Fabric

Pinning perpendicular to the edge of the fabric means the pin is at a right angle to the fabric’s edge. When you insert the pin at a right angle, make sure the head of the pin is visible on the outer edge if possible. That way it’s easily seen when you need to remove the pins.

When you pin your fabric this way, it’s possible to leave the pins in as you sew. The sewing machine needle will usually go over the pin as the fabric moves through the machine.

WARNING: There’s the possibility the needle could hit the pin. This could either cause a nick in the needle/pin or damage the end of the needle. It could even cause the needle or pin to break. A broken needle/pin could end up in the bobbin area or fly up and end up who-knows-where. Also, if the needle grazes multiple pins during a project, it will become dull sooner rather than later.

If you’re concerned about damaging or breaking the sewing machine needle and/or pins, take the pins out as you sew.

Remember, it’s good sewing practice to change your sewing machine needle on a regular basis. If you sew over pins, you may consider changing the needle after every project.

Pin Parallel to the Edge of the Fabric

When you pin parallel to the edge of the fabric, you decide how far from the edge you want the pin to be.

If you’re hemming a raw edge, you probably want to pin close to the edge to hold the hem in place. The pins will need to be removed as you sew. 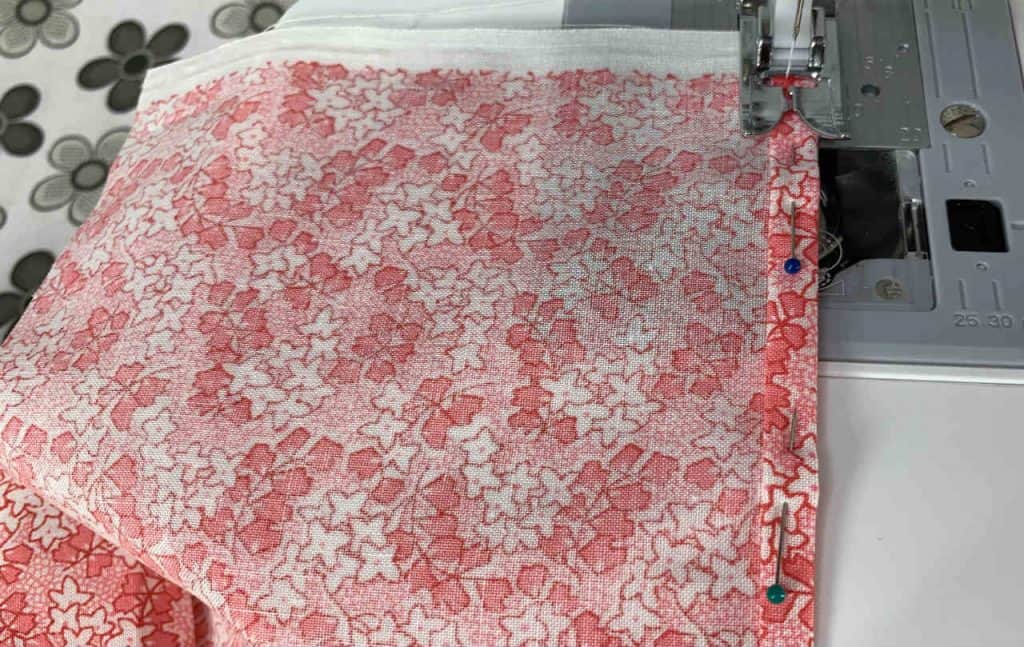 This is a narrow hem that has been turned twice.

If you’re sewing two pieces of fabric together, you can insert the pins so they’ll be on the left side of the presser foot. This way you can leave the pins in as you sew. 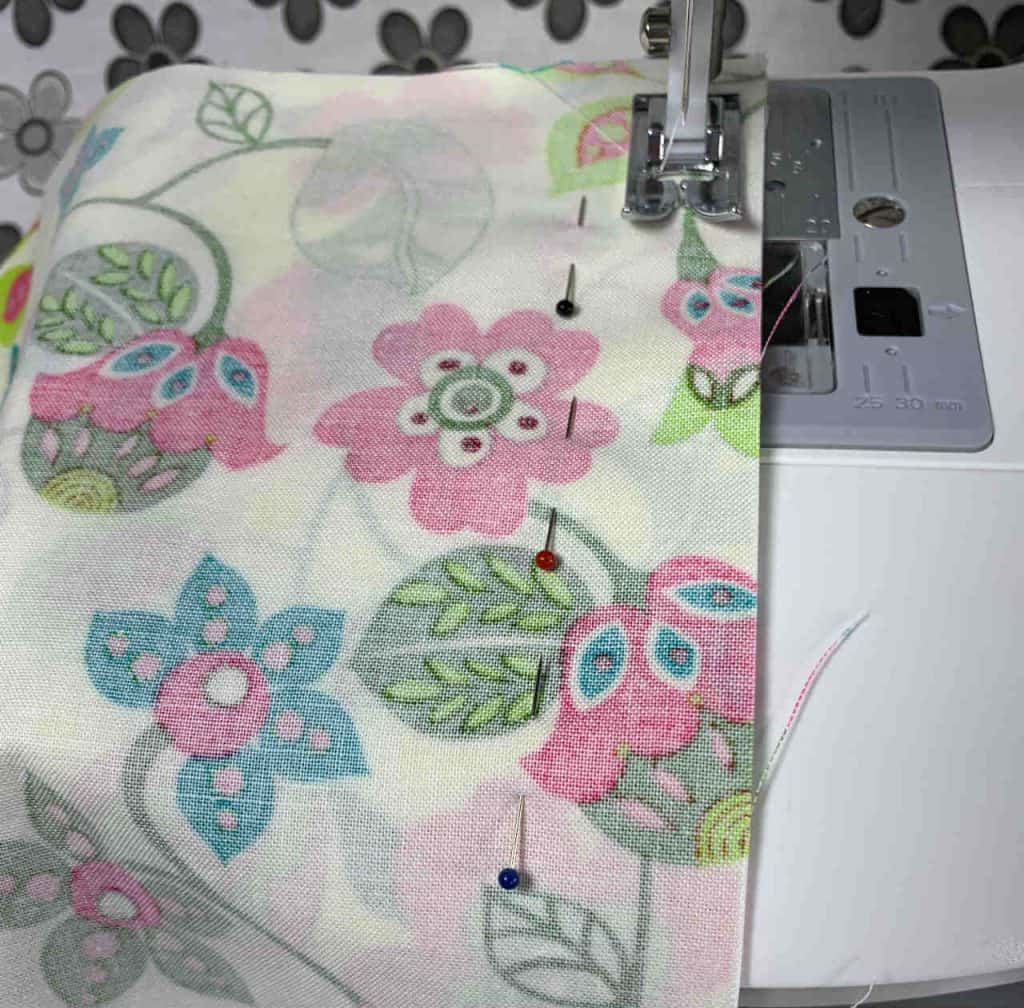 When pinning this way, make sure to leave enough room for the seam allowance, the width of the presser foot, plus a little extra.

My preference is to pin perpendicular to the fabric’s edge. One reason I like to pin this way is I’m less likely to be poked by the pins when they’re in the fabric. I don’t know why but anytime I insert the pins parallel to the edge, I’ll inadvertently stab myself as I move fabric from one zone to the other.

Another reason I like to pin perpendicular to the fabric’s edge is I tend to sew over the pins more often than not. Sewing for me is more enjoyable when I can maneuver the fabric in one continuous motion without having to stop to remove pins.

On the other hand, my mother never sews over pins. When I told her I did, she shook her head and emphatically stated,

“No! You never sew over the pins.”

At first, she told me it’s for safety. If the needle breaks just right, it could become airborne and land in the carpet, an unknown place, or even your eye.

Then she told me about the time she switched from silk pins to quilting pins. She sewed over a pin.  The needle or pin broke (she can’t remember which one) and became lodged in the bobbin case. The machine locked up and she was unable to remove the broken piece.

She ended up taking her sewing machine to a repairman to get fixed. Not only did it cost her sewing time, but it also cost money to repair. This happened after she had been sewing for many years (sometimes sewing over pins), but she won’t sew over pins anymore.

Now, while I have occasionally broken a needle, I’ve never had one fly through the air or cause damage to anything. They’ve basically just snapped and the eye of the needle got stuck in the fabric.

Mom’s story is in my head now. Since then every time I sew, I decide if the risk is worth it to sew over pins….especially if I’m sewing over larger quilting pins. Convenience usually wins and I just keep sewing. That might change, though, if I ever have something bad happen.

One thing I’ve learned with my tendency to sew over pins is after I complete a project I remove the needle and carefully run the fingernails of my index finger and thumb lightly down its length. I’m feeling for a nick or burr on the needle caused by pins. If I feel any irregularities, I change the needle.

I’d like to hear your thoughts. Try pinning in different ways. Let me know what method you prefer and why.

Use caution when working with sharp tools and objects including, but not limited to, scissors, needles, pins, and rotary cutters.